How Rheological Data from a Capillary Rheometer Can Help to Have a Better Metal Injection Molding (MIM) Process?

Metal injection molding (MIM) is an advanced metalworking process to produce parts with complex shapes and high tolerances from a mixture of polymeric binder and metal particles/powders at specific volume ratios (feedstock). The flexibility and mass production of injection molding process makes it to be a great replacement to the traditional metallurgy process and therefore, MIM has been growingly performed in industry for large-number production of metal parts. 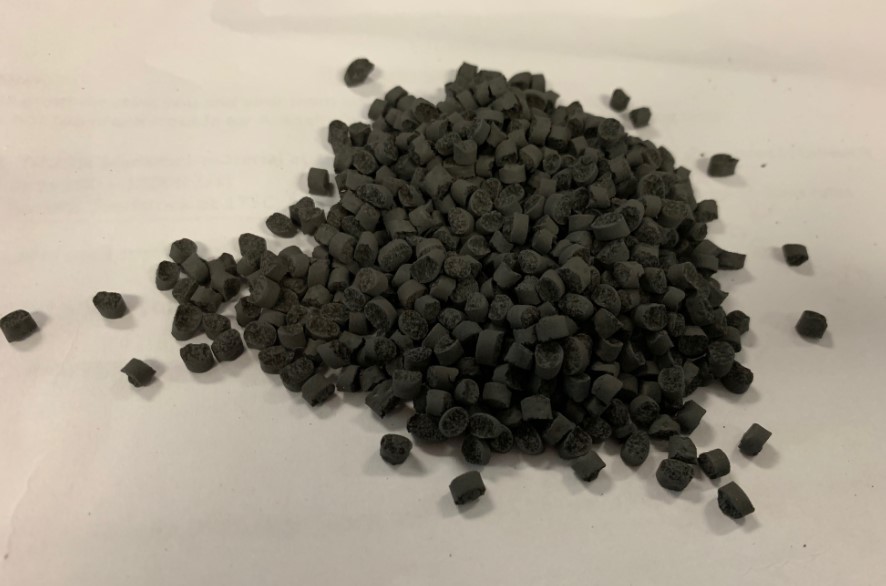 One of the key factors in any MIM process is the flow behavior of the feedstock during filling of of the mold. In order to have a defect free molding process (without jetting, short shot, sink mark, crack, etc.) with desired mechanical strength (tensile, flexural, failure stress, etc.) in the final products, understanding of the rheological properties of the binder and feedstock is necessary. The rheological analysis also helps to have defect free debinding and sintering procedures which are the final steps in a MIM process and gives the required mechanical strength to the final products.

In terms of rheological properties, there are three main factors which have significant effect on a MIM process namely, viscosity at the processing shear rate, thermal sensitivity, and shear thinning behavior of the feedstock. All these factors can be analyzed using a capillary rheometer. Since this rheological characterization method provide a wide range of shear rate, it is the best approach to study feedstock melt behavior in an injection molding process.

Normally, the shear rate during a MIM process is in the range of 102-105 1/s. In order to have a defect free final product, the viscosity of feedstock at this range of shear rate (at mold temperature) needs to be less than 1000 Pa-s. Particle loading level, particle distribution, and the binder formulation are the factors that determine the viscosity of the feedstock. Higher particle loading in the feedstock is desirable for better mechanical properties and reduced dimensional shrinkage in the final products. However; it has the compensation of increasing the viscosity and reducing the processability. As a result, understanding an optimal loading level is critical and helps to maintain a reasonable flow and mold filling during MIM.

The viscosity of feedstock can be reduced by increasing the process temperature or by including a low molecular weight polymer and/or plasticizer in the binder mixture.  This also helps for easier polymer extraction during final debinding step in MIM. Moreover, in order to avoid particle agglomeration in the feedstock and improve the particle distribution, proper additives might be required to be used in the binder mixture. The type of the additive depends on the binder and particle formulation and it can be chosen to improve the wettability of the particles and provide proper interactions with the binder. The viscosity of the feedstock in the processing shear rate range can be measured using a capillary rheometer with a proper capillary die (diameter < 1mm).

The other important factor in MIM is the shear sensitivity of the feedstock melt. Flow behavior of feedstcok is more complicated than that of polymeric binder since it directly gets affteced by the particle de-structon and inetraction between them. Shear sensitivity can be analyzed by measuring power-law index (n) parameter. This parameter which can be obtained from the power-law model determines if the feedstock melt has pseudoplastic (n<1) or dilatant (n>1) behavior. Typically, a feed stock with greater pseudoplasticity and shear thinning characteristic is more desirable for MIM since this condition avoids particle and binder separation during the process (specifically at high shear rates).

Feedstock 1 shows minor shear thinning at shear rates 100-270 1/s. However; this behavior is replaced with dilatant flow behavior upon further increasing of the shear rate. The dilatant behavior which is not desirable for MIM process indicates that particle disordering is happening at higher shear rates which prevents the slide overring of the feedstock melt layers on each other and consequently the viscosity increases.

Feedstock 2 and feedstock 3 on the other hand, show pseudoplastic behavior with almost no visible Newtonian region. This indicates that the metal particles are disrupted with increasing shear rate and orientation/ordering of the particles along the flow direction is happening. This causes reduction of the amount of suspended melt entrapped between the particles and promotes inter-particle motion which causes reduction of viscosity. Using power-law curve fitting, the power law index parameter of feedstock 2 and feedstock 3 was calculated as 0.71 and 0.86 respectively. Therefore, feedstock 2 with the lowest amount of power-law index in this case, has the highest shear thinning behavior and it is the most desirable for injection molding process (despite of its higher viscosity at lower shear rates).

Another important factor for having a successful MIM is the thermal sensitivity of the feedstock which depends on the binder/feedstock formulation. The temperature of a highly filled feedstock can change easily through the molding process (from the feeding section to the end mold section).

For the best quality of the processing, it is desirable to have a feedstock with low sensitivity of the viscosity to the temperature.

The thermal sensitivity of polymer melts can be quantitively analyzed by measuring the flow activation energy (Ea) parameter. Feedstocks with higher flow activation energy have stronger dependency of viscosity to the temperature. These feedstocks are less desirable for MIM since a small change in the process temperature might cause significant variation in their viscosity and consequently causes degradation or mold defects. The temperature dependence of viscosity can be represented by Arrhenius relationship as below

Ea parameter can be calculated theoretically from the slope of the Arrhenius plot (logarithm of viscosity versus inverse temperature). This plot has been shown in Figure 2 for three different feedstocks with different formulations at three different temperatures and a constant shear rate. 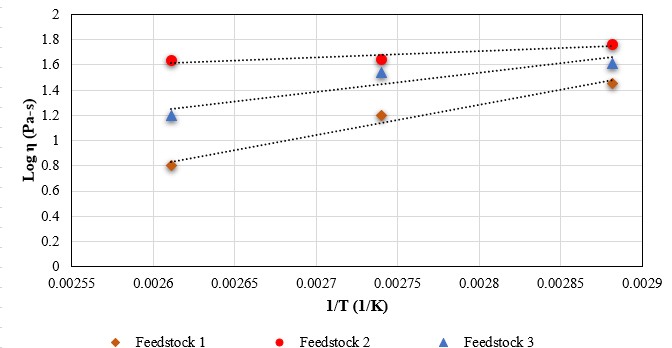 Feedstock 2 with the lowest activation energy in this case, is more suitable for MIM in compare with two other feedstocks.

All these key factors in a MIM process (viscosity and its dependency to the shear rate and temperature) can be combined to one parameter ( ) named as moldability parameter.